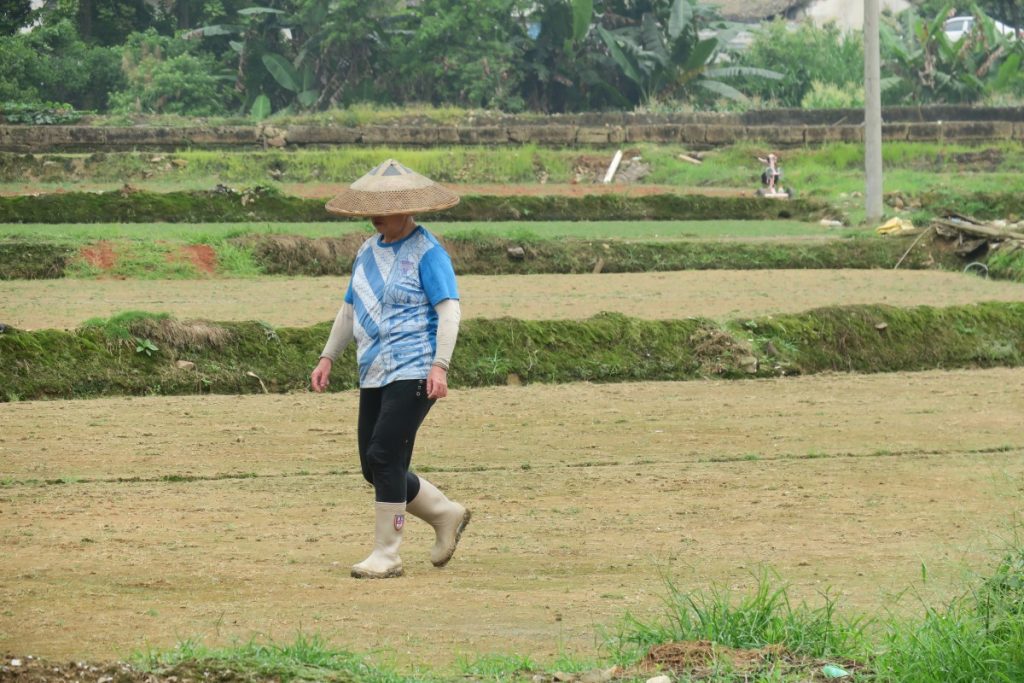 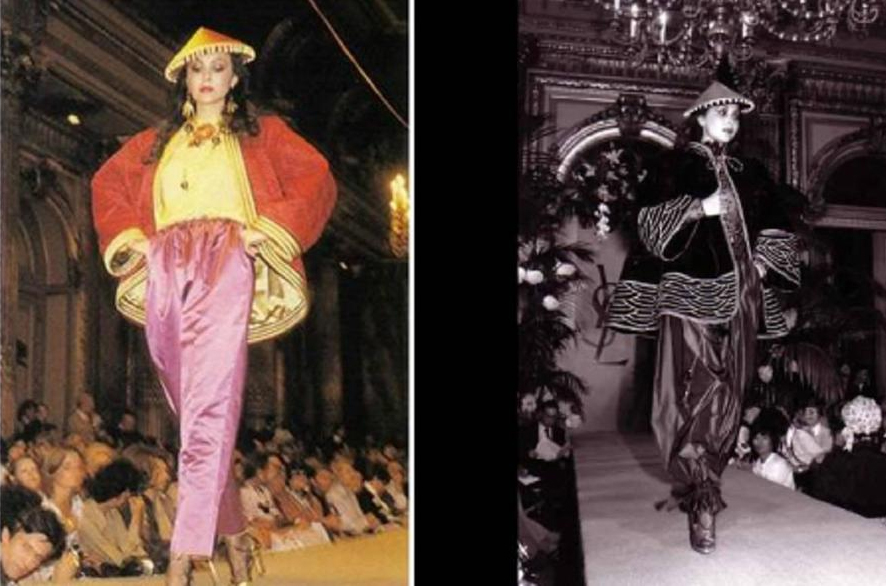 In 1977 – shortly after the end of the Cultural Revolution – Yves Saint Laurent released his „Chinese Collection“. It´s signature piece was the Asian conical hat, combined with the noble appearance of the bygone empire. 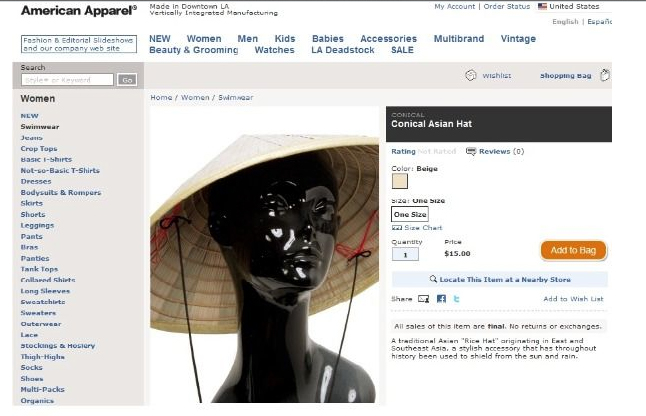 In 2011, when the retailer American Apparel (at this time already discredited for the company´s exploitative working conditions) tried to launch the conical hat as a fashionable item in their sortiment, Asian Americans accused the company to behave racist and offensive.
The conical hat was imported to America by impoverished Chinese immigrants, coming to the US since the midth oft he 19th century, wearing it for their work outside. But as it was related to the lowest social status of cheap labour, it remained always separated from the American clothing culture.
And for the overseas Chinese Americans – a lot of them descendants of those early immigrants – the „coolie hat“ obviously remained a symbol for their humilating treatment as working slaves in the diaspora. 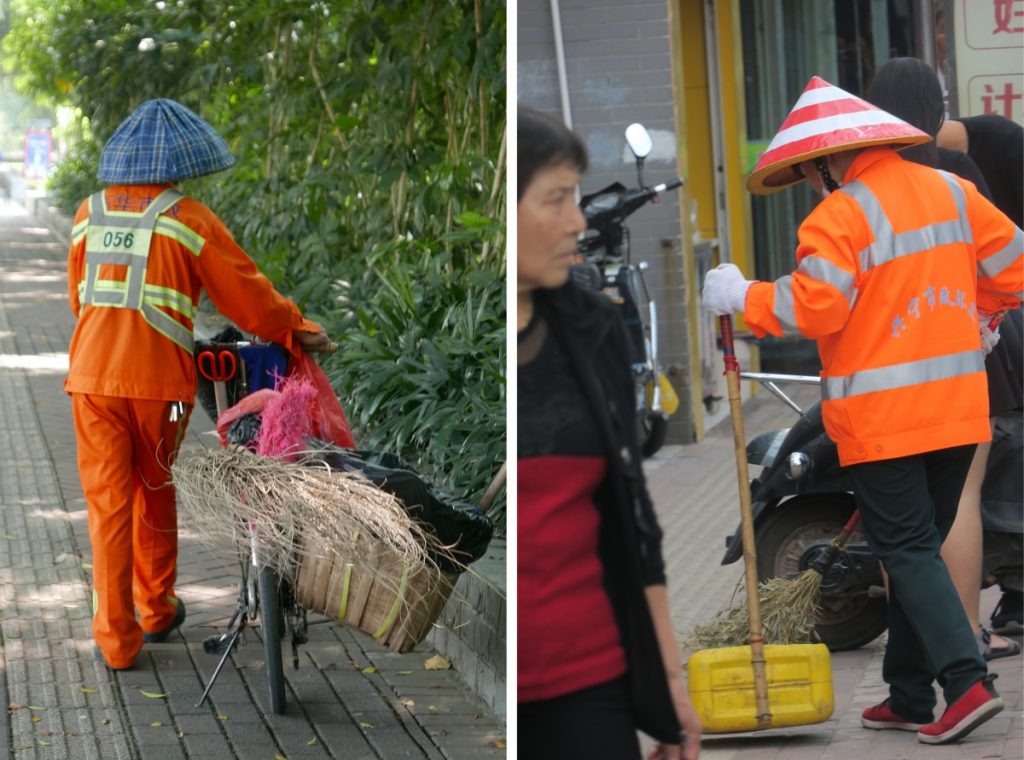 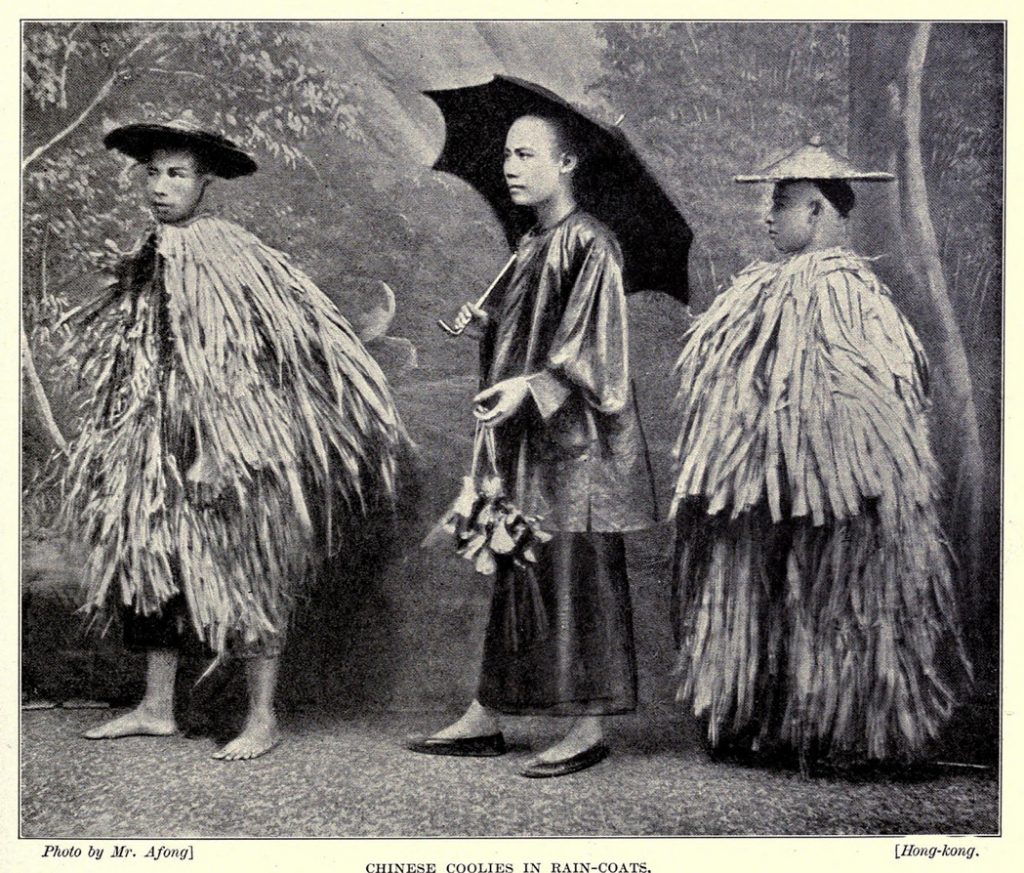 The Afong Studio, active from 1859 to around the 1940s, was one of the early photographic studios in Hongkong, especially servicing a Western clientele. The name „coolie“ was introduced by Westerners as an derogatory term for those indentured labourers and working slaves, who immigrated from Asia to the West. 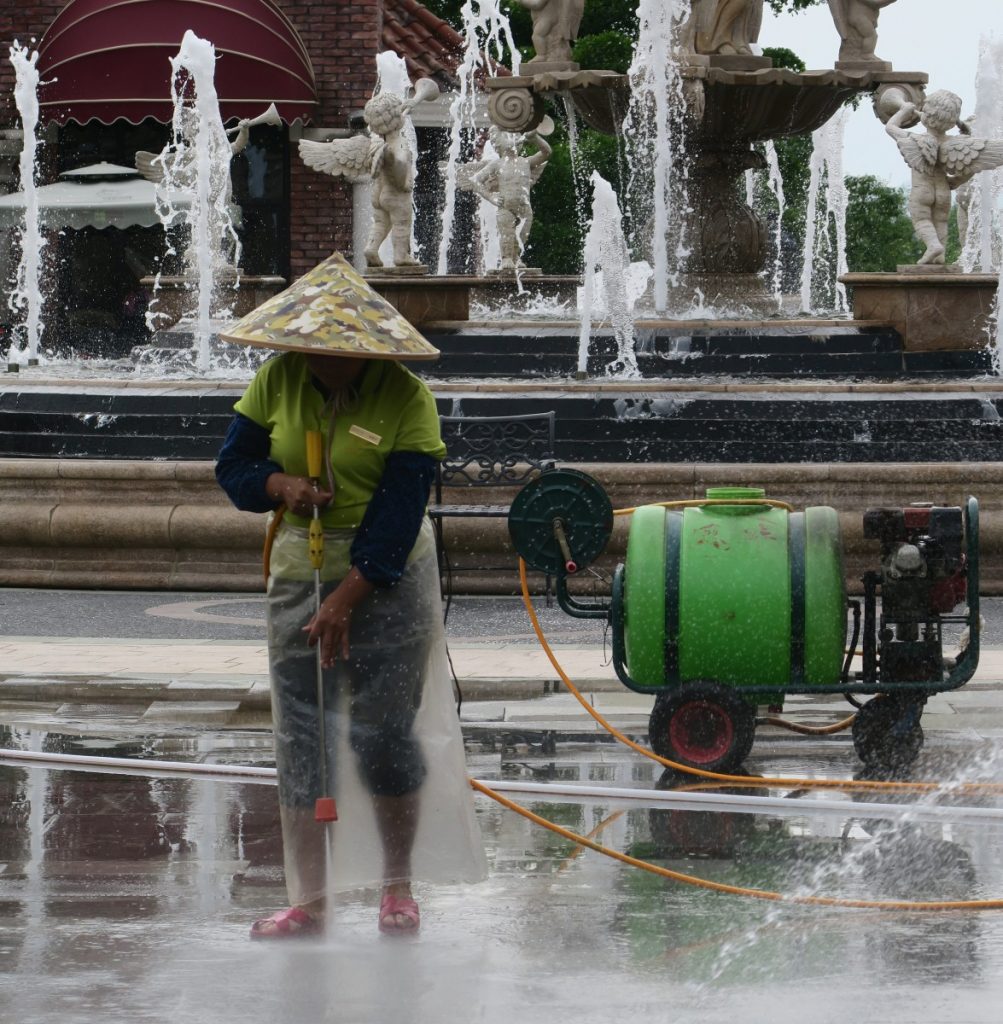 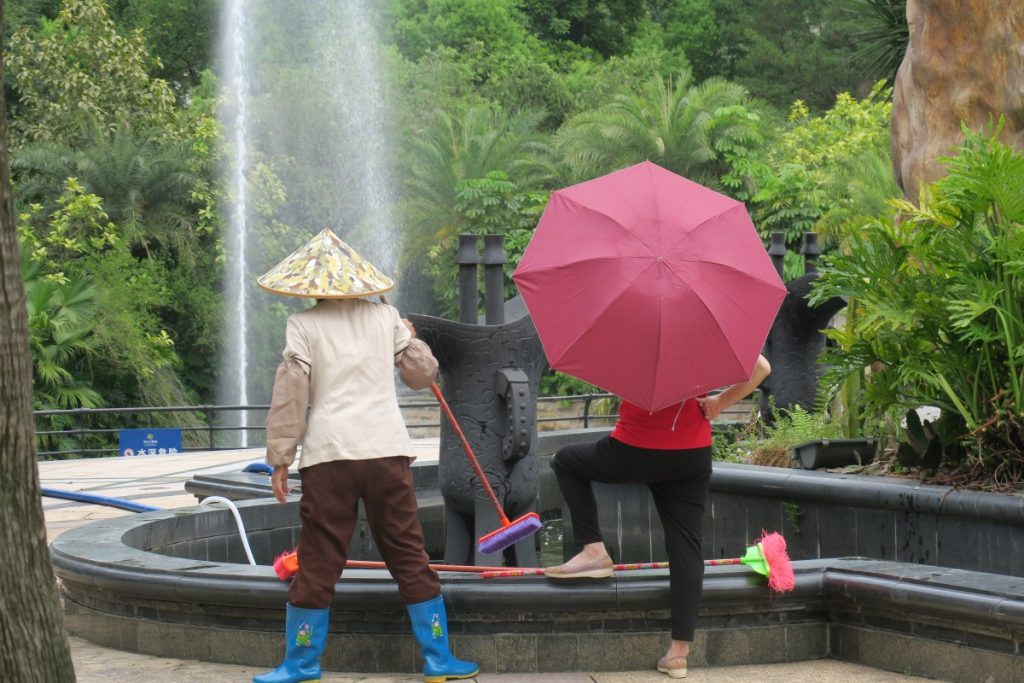 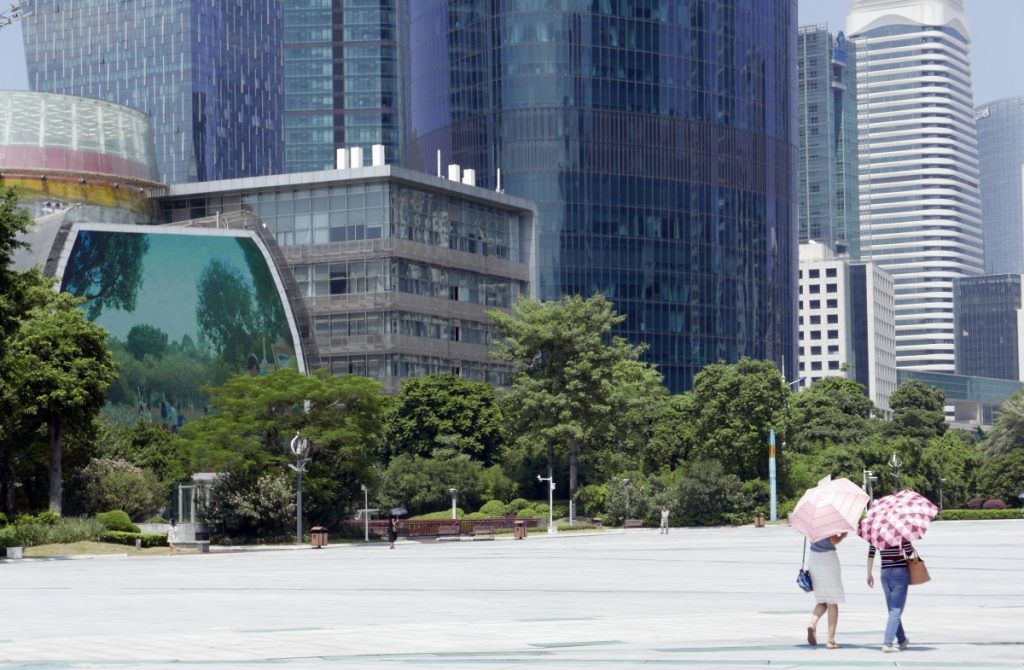 Guangzhou/Guangdong province, 2016 – Pale skin remains an aesthetic ideal in modern China. But as the conical hat is attributed to the lower working class, „white collar workers“ and people from the upper classes would never consider to wear them. 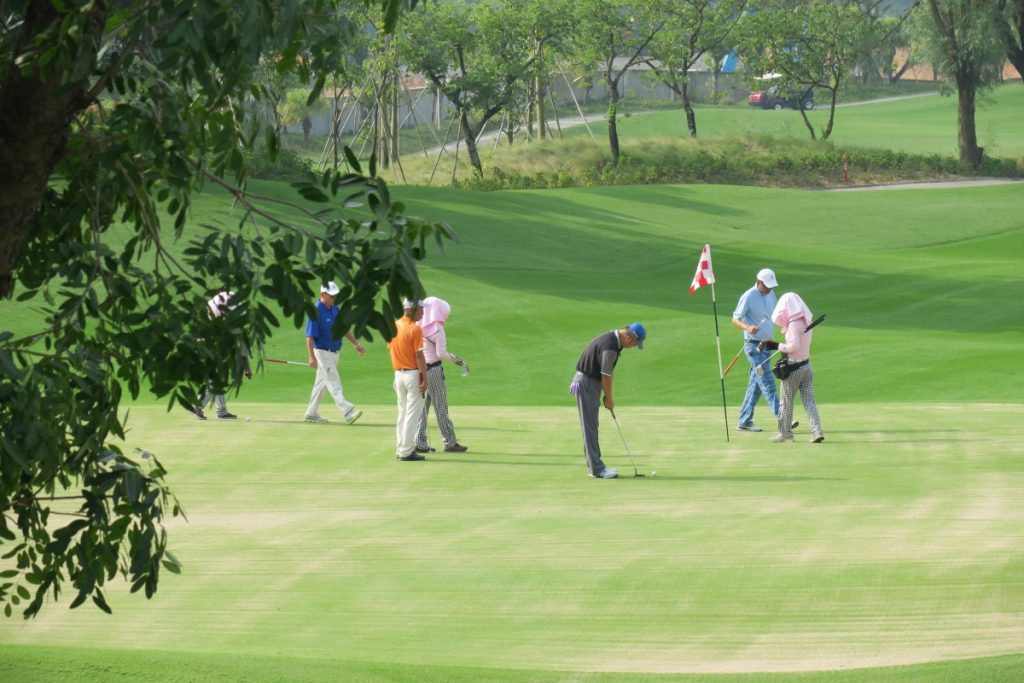 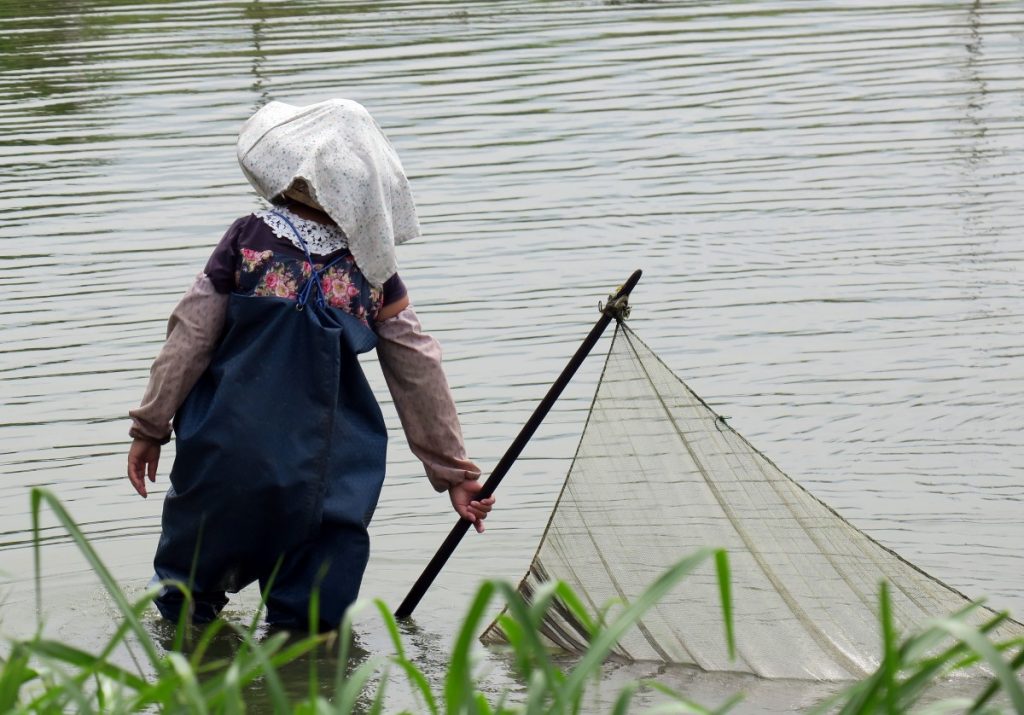 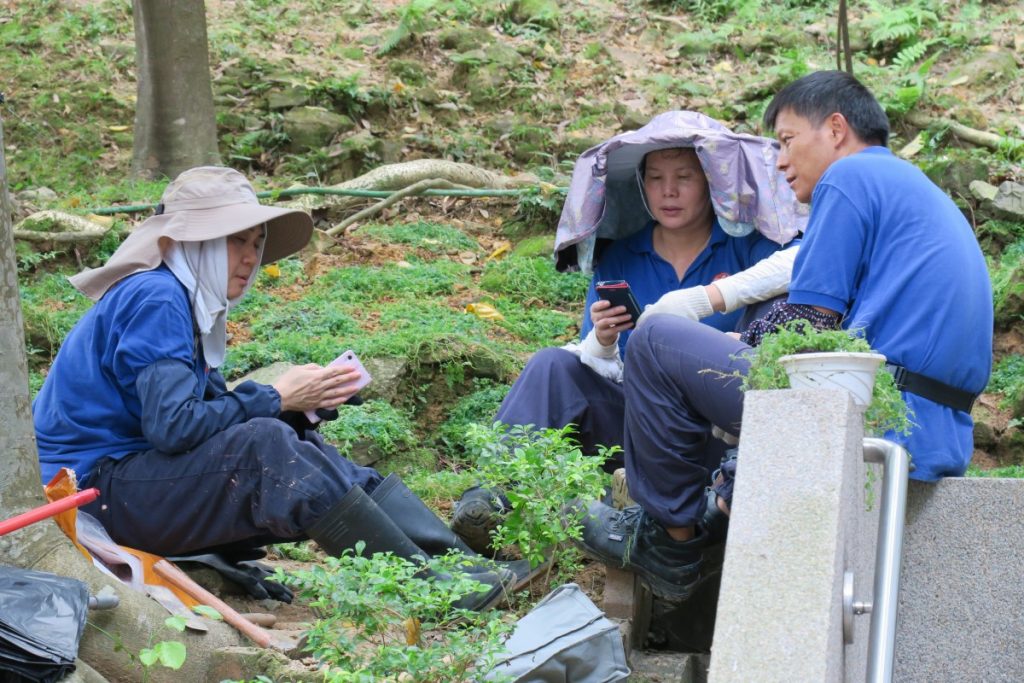 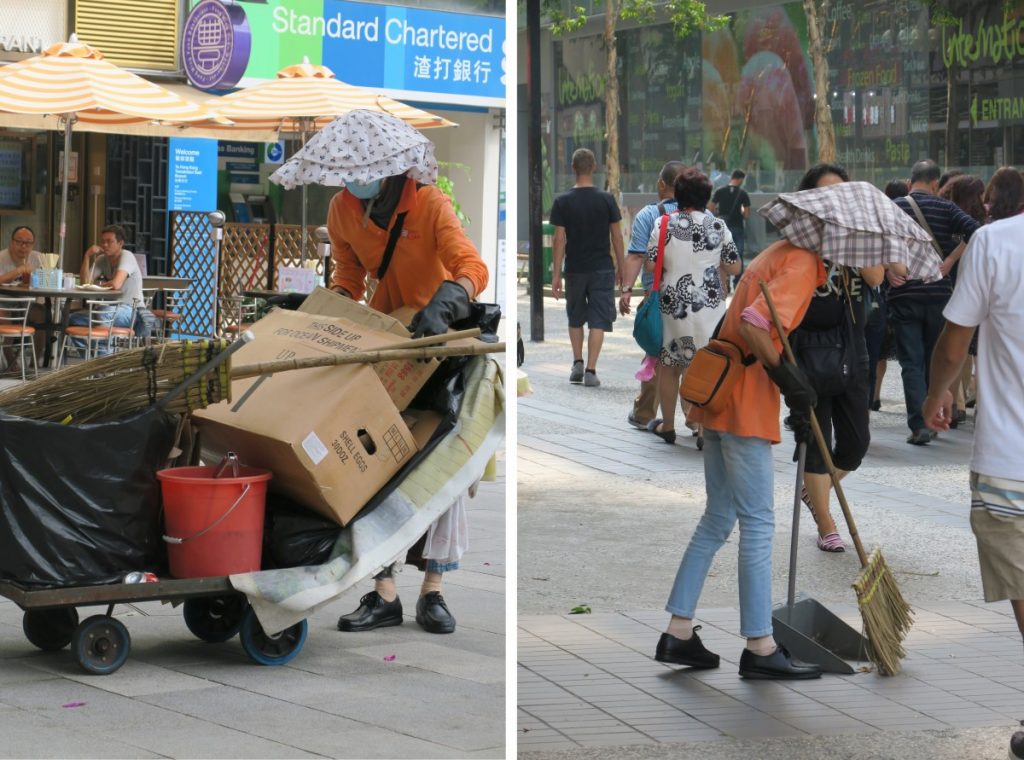 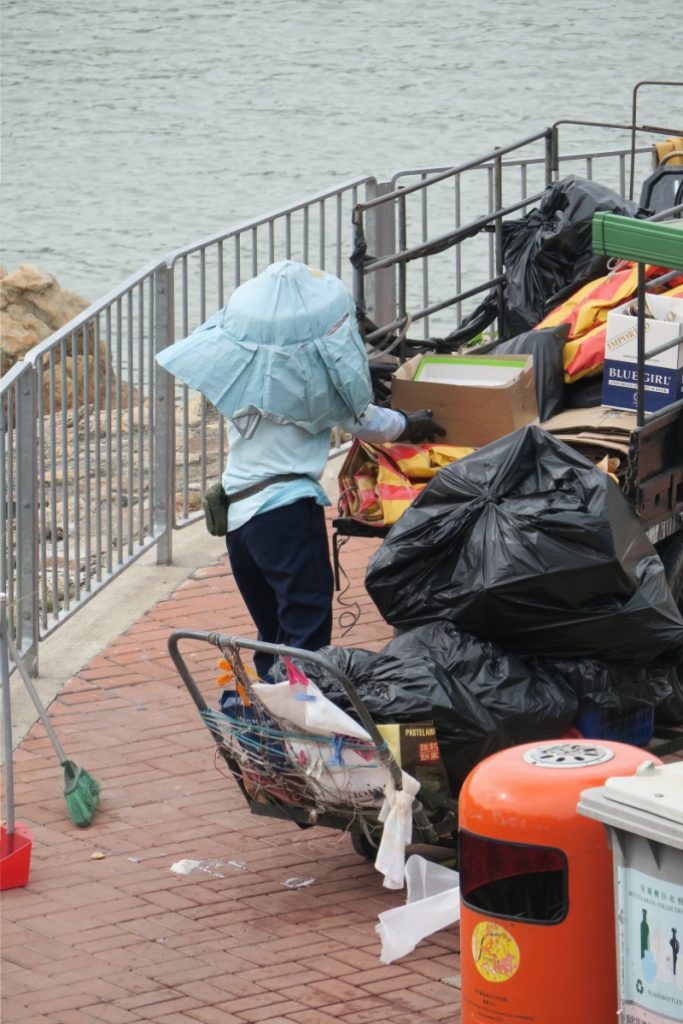 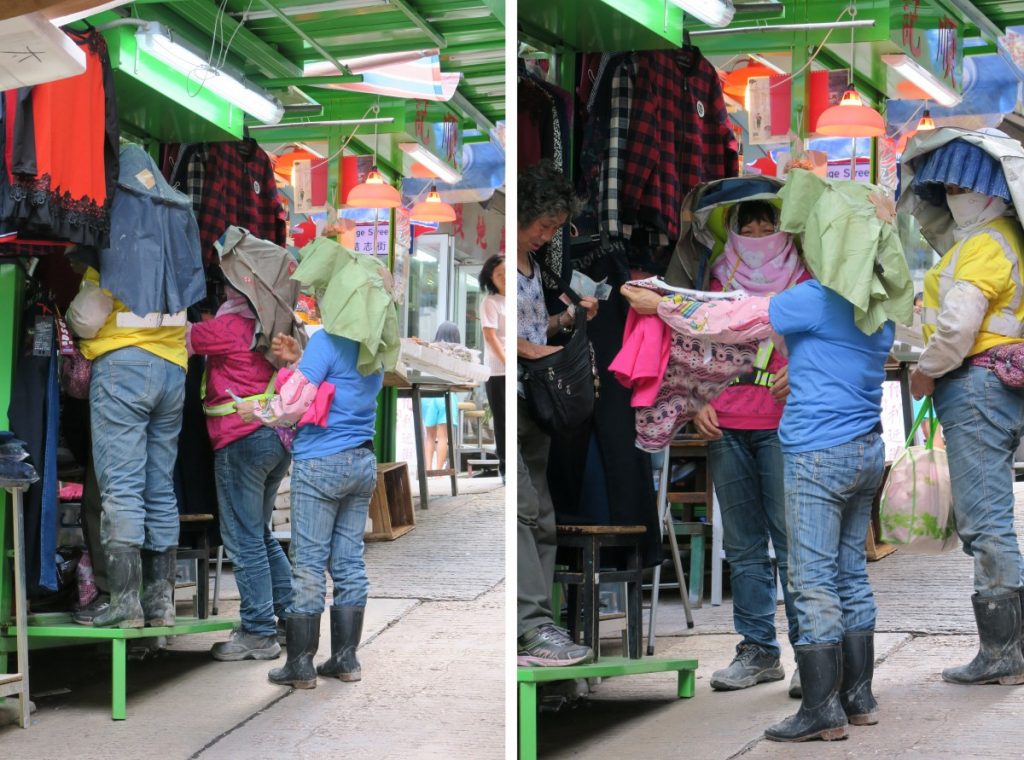 The center of Hongkong seems to consist almost only in shopping malls stuffed with international fashion brands. Surprisingly there are still left some very small niches with ordinary „Chinese-style“ markets in between the dense modern skyscraper landscape. It was over there I faced this three women, who attracted my eyes because of their amazing hat styles and spreading an intimate feeling of togetherness. Just later I recognized that they wore obviously a modern modification of the traditional Hakka hat, which I had discovered in old photographs and travel guides, featuring the rural lifestyle in China. 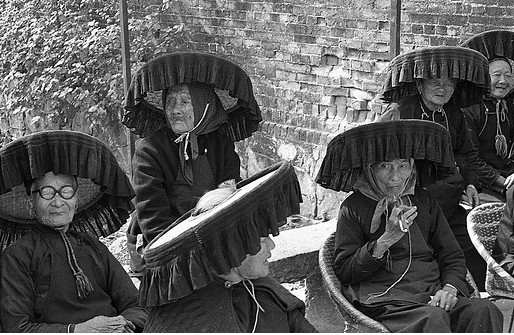 The Hakka people came as migrants to Hongkong from the 17th century onwards and as the fertile plains were already occupied, a lot of them remained poor farmers and workers. Up to now there are existing several small rural villages in the New Territories of Hongkong, where the majority of the population is made up of Hakka people.
Hakka means something like „guest people“ and before they entered Hongkong, they had already a long history of migration behind them. Originally coming from the Yellow River Valley, they had to leave their homelands several times and immigrated to South China in the 13th century.
Even if they are not counted among the Chinese minority ethnies, but are members of the Han Chinese majority, it is said that their communities never fully assimilated into the native communities. Instead they were cultivating a strong shared Hakka identity (e.g. Hakka women never bounded their feet).
Fleeing from poverty they are spread all over the world and there is a huge diaspora living in Indonesia, Mauritius, Reunion, Jamaica, USA etc.
Some of them became economicly very successfull and among them are a lot of influential political leaders, such as Sun Yat Sen (founding father of the Republic of China), Deng Xiaoping (post-Mao paramount leader oft he People´s Republic of China and responsible for modern China´s economic reforms and the opening to global markets), Singapor´s president Lee Kwan Yew and Taiwan´s president Lee Teng-hui etc. 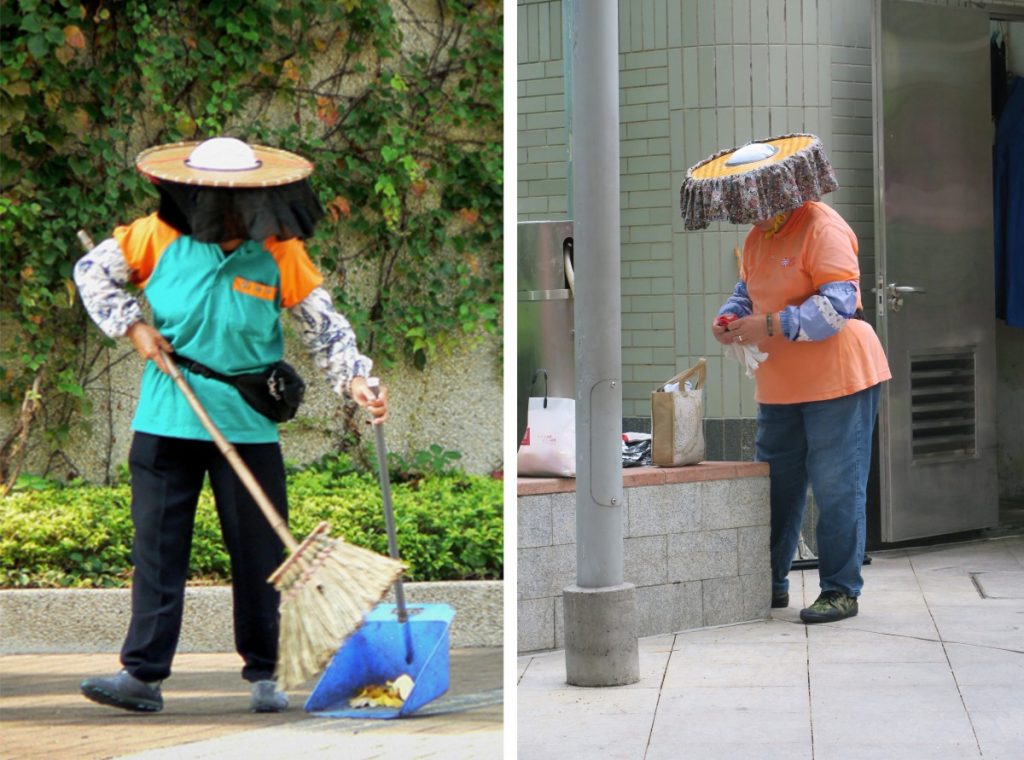 Why the Hakka hat style ironically survived as an individual identity mark of Hongkong´s road sweepers remained a mystery for me. 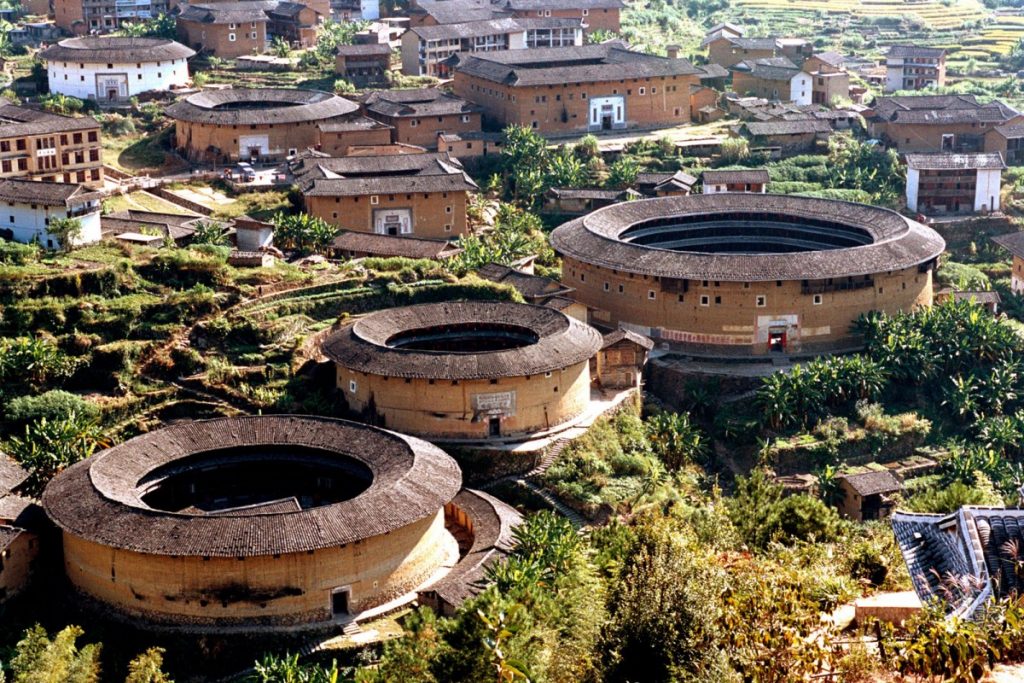 I was surprised by the similarity of the Hakka hat to their traditional rotunda´s architecture. It is said that Hakkas prefer the circular walls, because in their folk believe evil spirits are attracted by corners. 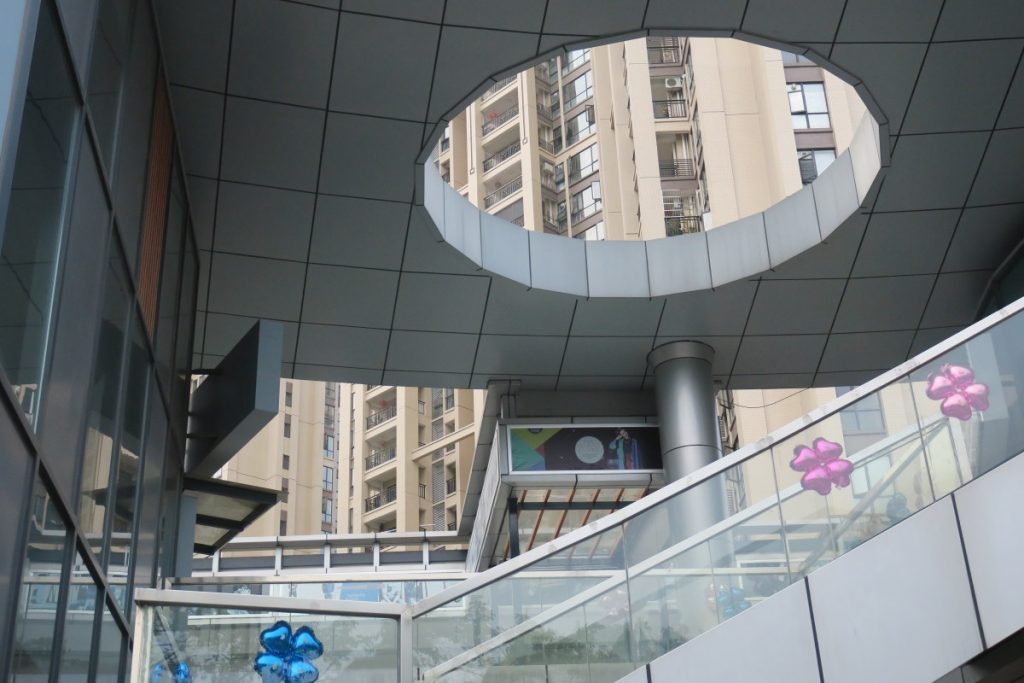 Modern Hakka architecture with a circular opening in the roof in Meizhou/ Guangdong , 2017 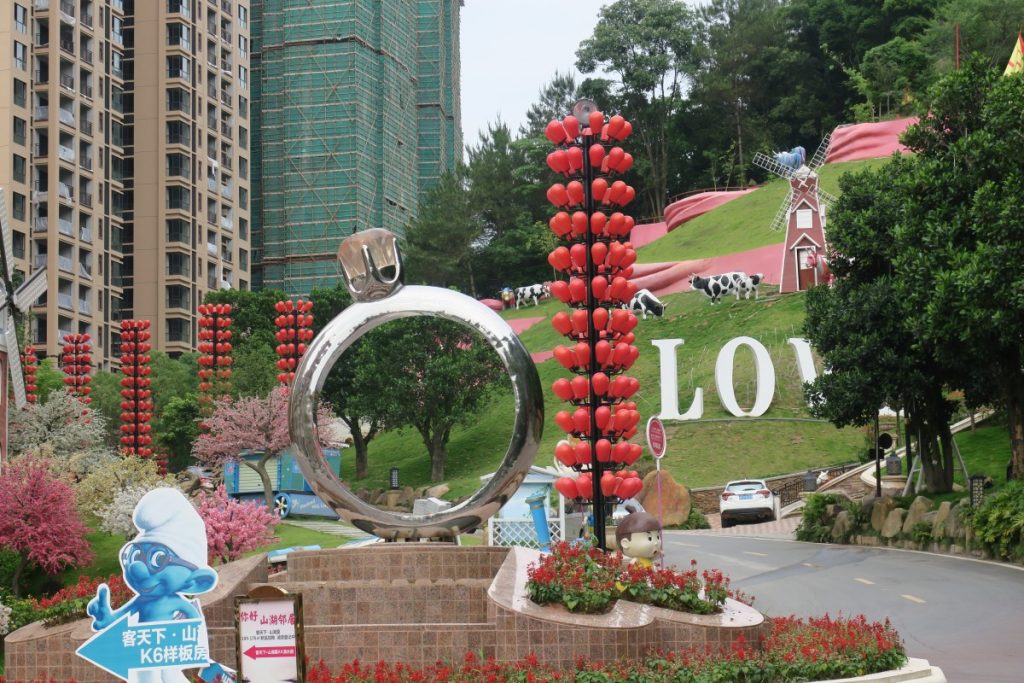 The „Hakka Wedding Cultura Industrial Park“ in Meizhou is just a small part of a big Hakka real estate investment project. Not only money but also all kinds of cultural set pieces from the diaspora seem to  merge together over here. 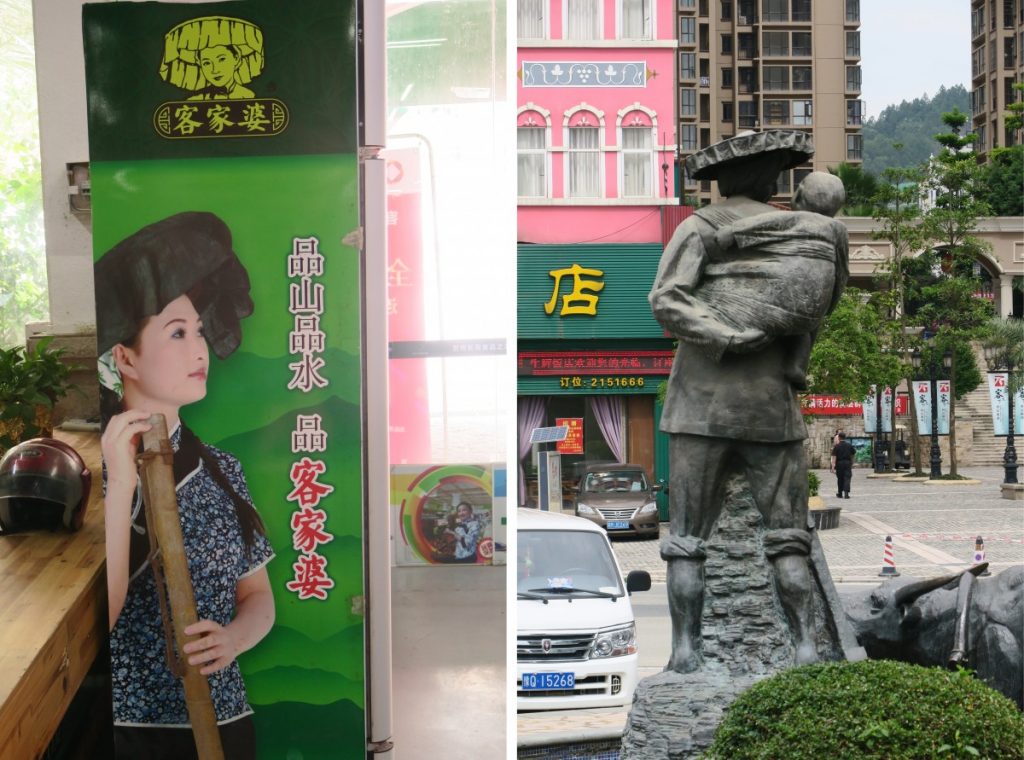 Meizhou counts as the capital of the worldwide Hakka community. I didn´t meet a single Hakka hat all over the city, but it´s iconic manifestation as a brand in front of the freshly built „Hakka Park“.